sneak peek at Cartouche Chronicles 3: maze of the Minotaur Artwork

​Front Cover
Working rough draft, still lots more crazy to add !  Eventually I want to work in the Minotaur either right between Anubis and Horus or at the end of the maze, but I haven't figured that out just yet.  I also want to add a golden string behind the Six as they begin to work their way through the maze (so they don't get lost), just like Ariadne's in the classic myth - or is it perhaps all true, hmmm ? 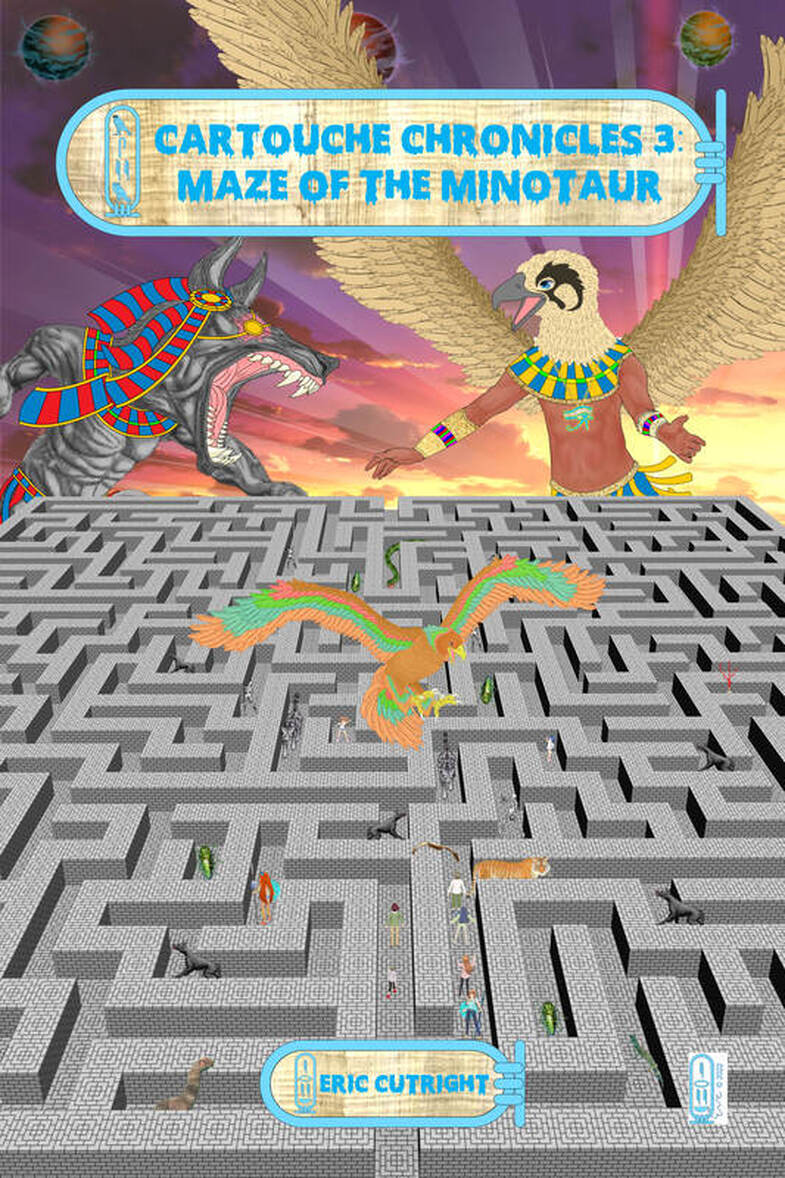 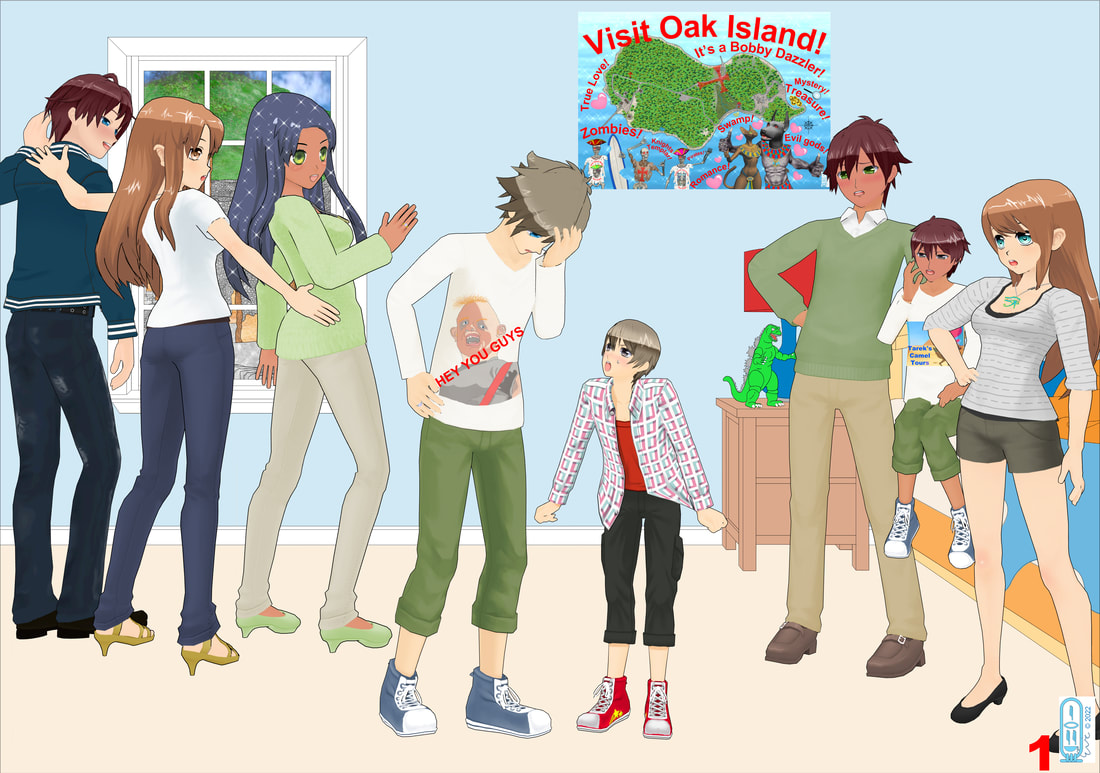 Bonus Chapter 1 Easter Egg poster!  I had so much fun creating this "Visit Oak Island" poster as an Easter egg for Marc's room in Pompeii (above) that I decided to post it here as bonus material!  This poster is a spoof on Asim's ridiculously romanticized version of his "first date" on Oak Island with Sydney from CC2: Practice (right before she conjured Big Spikey to clearly express her disagreement).
​
Characters (left to right): Past president One Eyed Willy Fan Club pirate zombie, Templar Knight zombie, past president CC Fan Club pirate zombie, Bastet (still need to fur her), Anubis (still need to fur him) 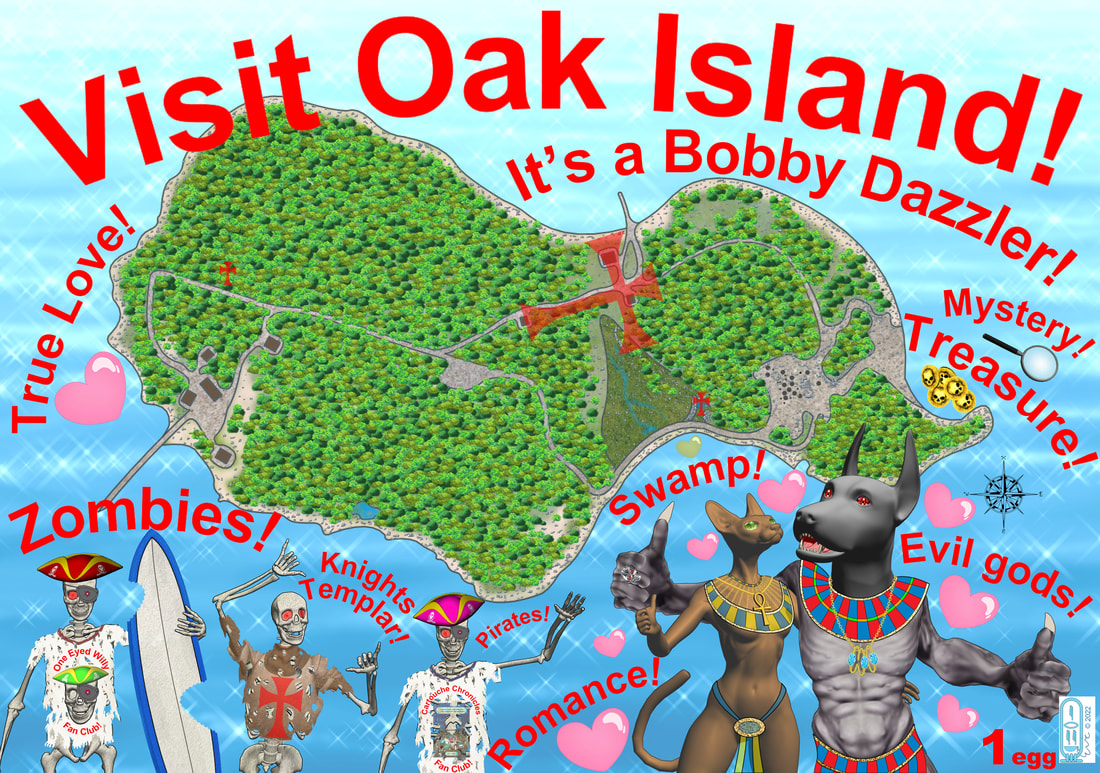 Chapter 2: Snafu
I'm getting close to done with this one - still a few final tweaks and more Easter eggs to add!

Characters (left to right):  Ummm, sorry - too many spoilers.  Let's just say time travel is involved, so maybe you can figure it out! 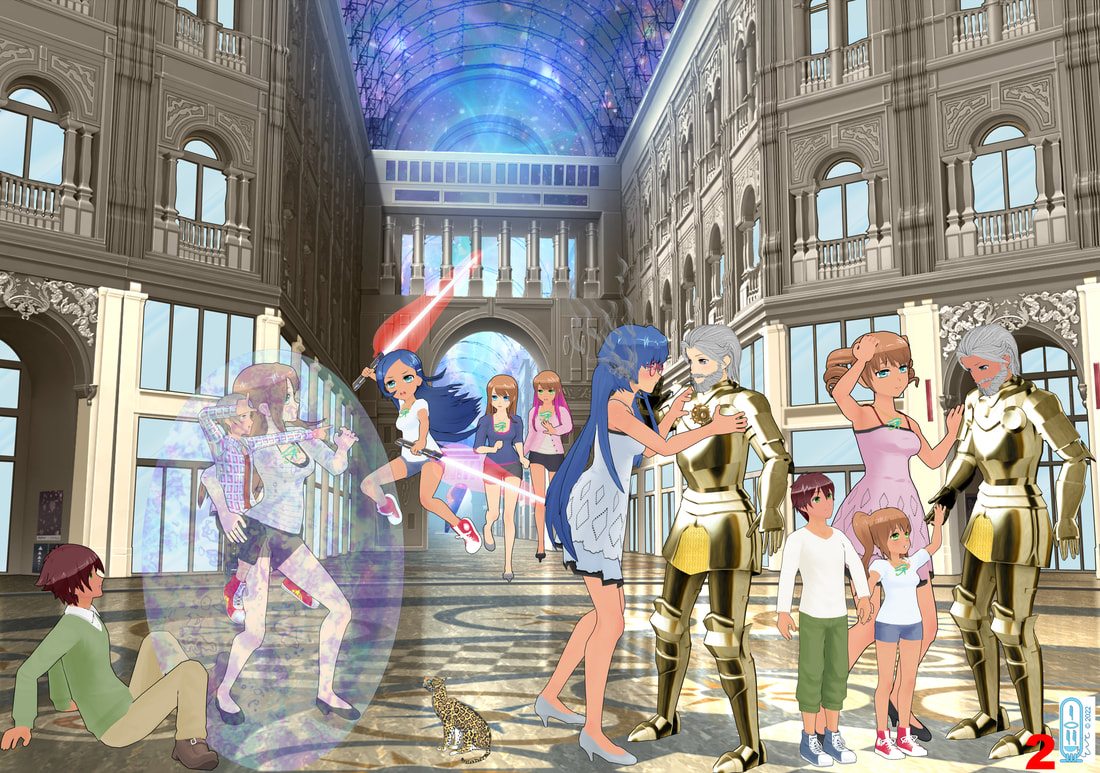 Chapter 3: Leeloo
First rough draft, lots left to do, and my first-ever attempt at drawing a massive makhluq alwasi !  Leeloo is a crazy mix of fierce lion, gorgeous spots like a jaguar, dangerous build of a saber-toothed tiger, wicked teeth that remind me of the spiders from The Hobbit (old animated version), and a colossal spiked-back dinosaur with a deadly tail like a mighty stegosaurus.
​
Characters (left to right): Leeloo (rough draft, still need to fur her), unlucky bird, Sydney, The King 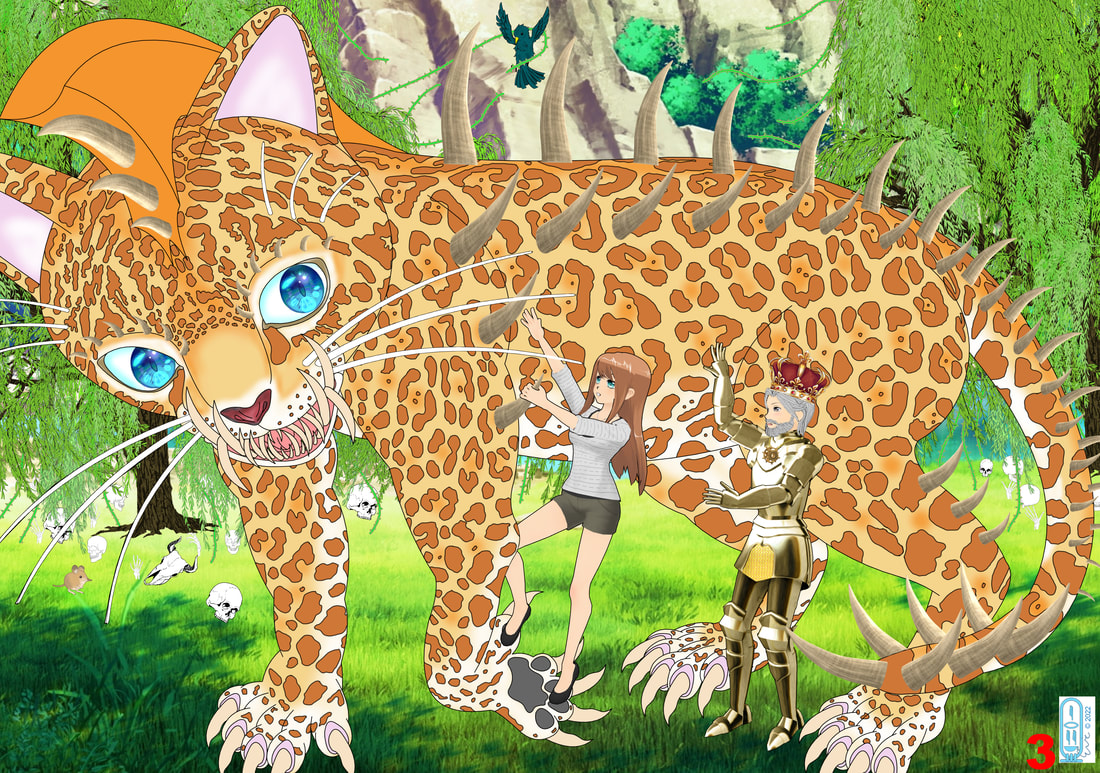 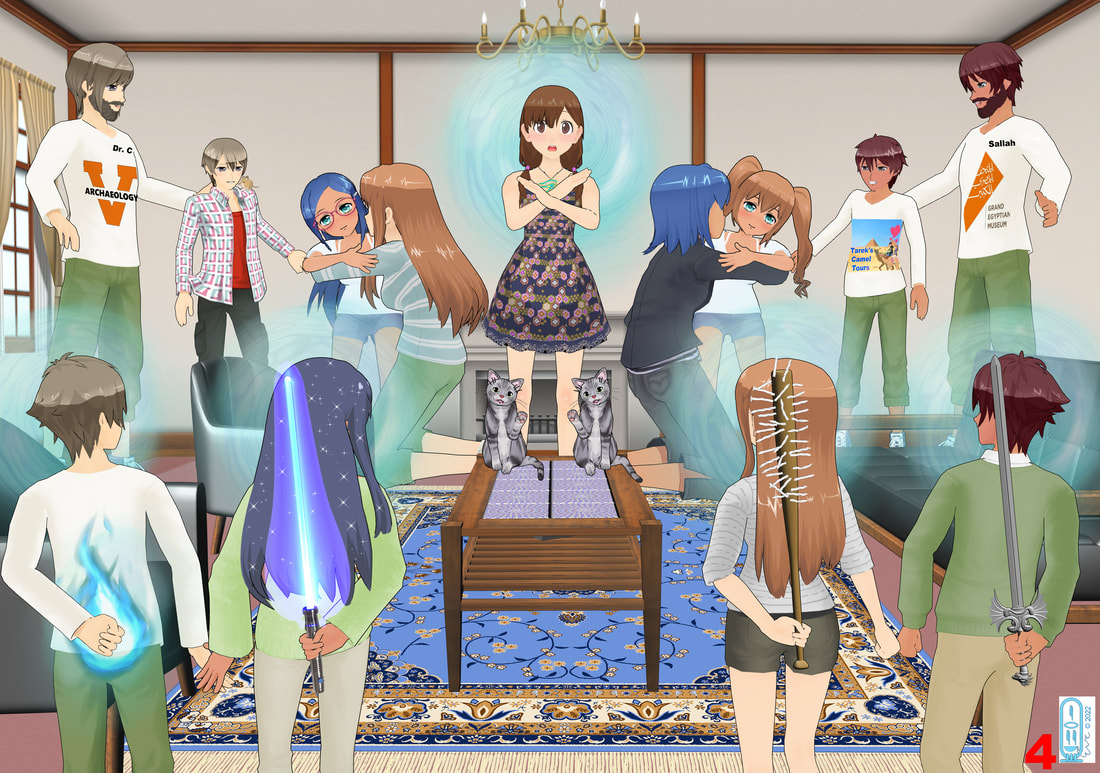 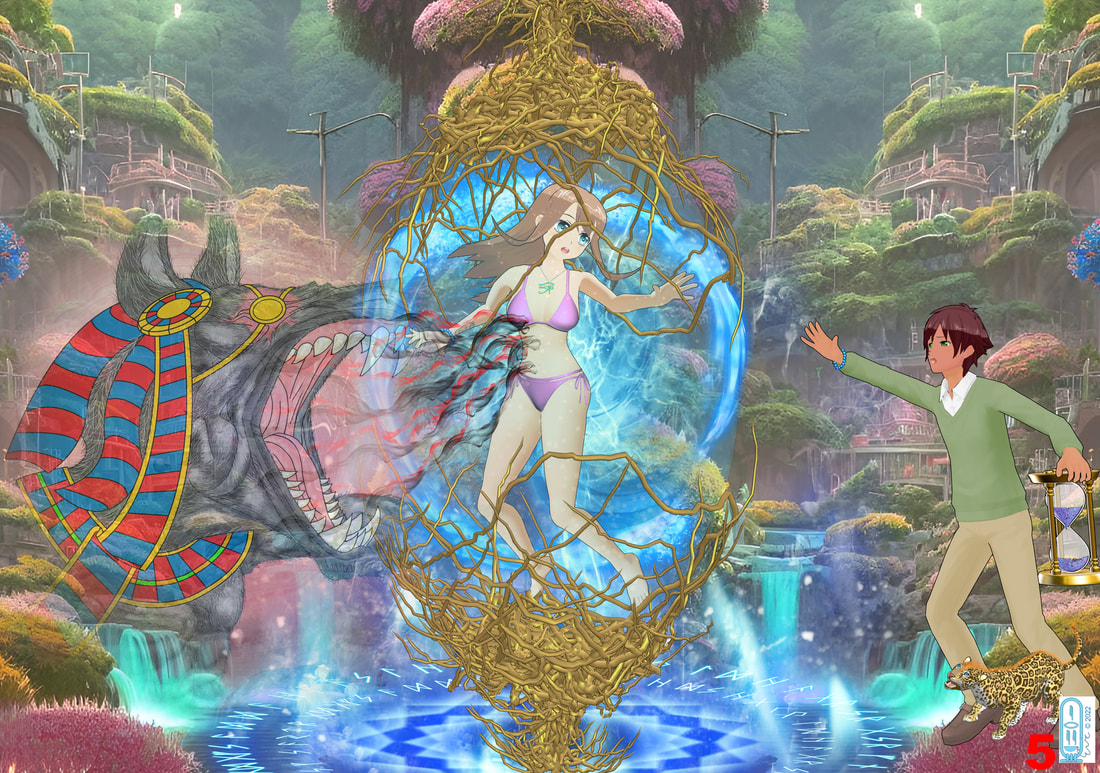 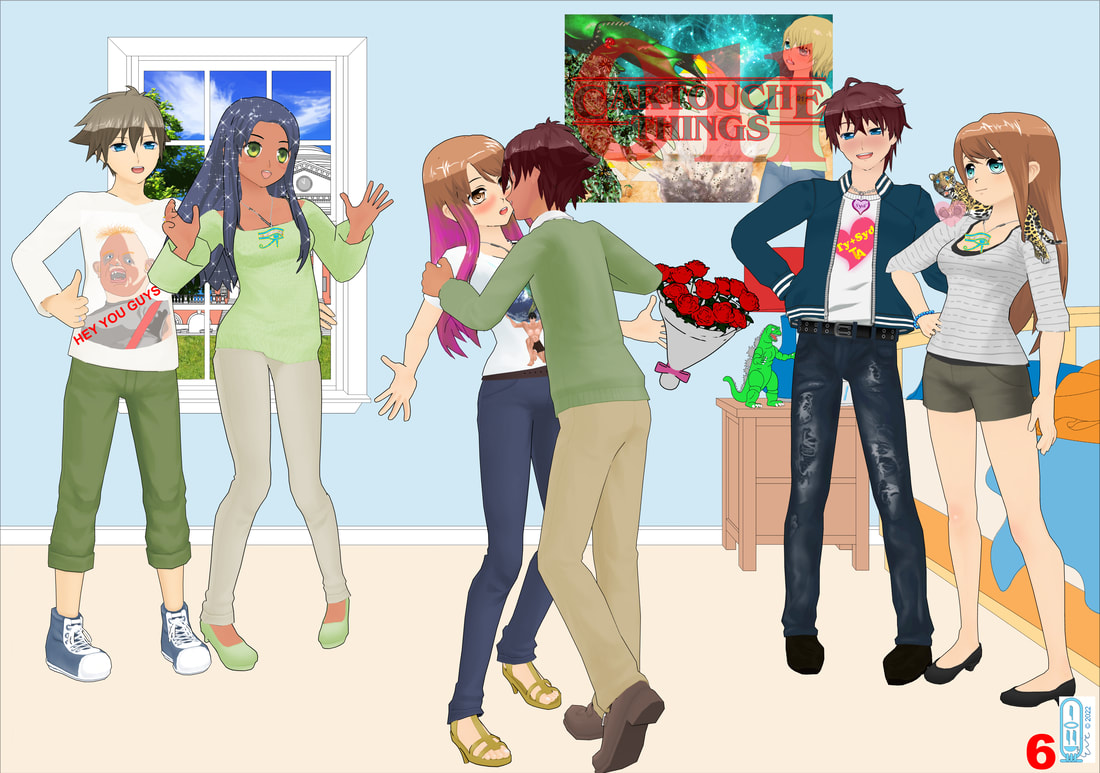 Bonus Chapter 6 Easter Egg poster!  So obviously I love all things ST, so made an Easter egg poster for Marc's room as a little homage to my favorite show.  It was incredibly fun to draw, especially Anubis' evil god-buddy Khepri, the scarab headed god whose grotesque body is entirely made up of squirming beetles and insects, maximum yuck!  This is a first rough draft - I still have a bit to do (mostly making Khepri look nasty, dangerous, and evil enough to fit the vision in my crazy mind, plus maybe adding a couple more characters behind them) ! 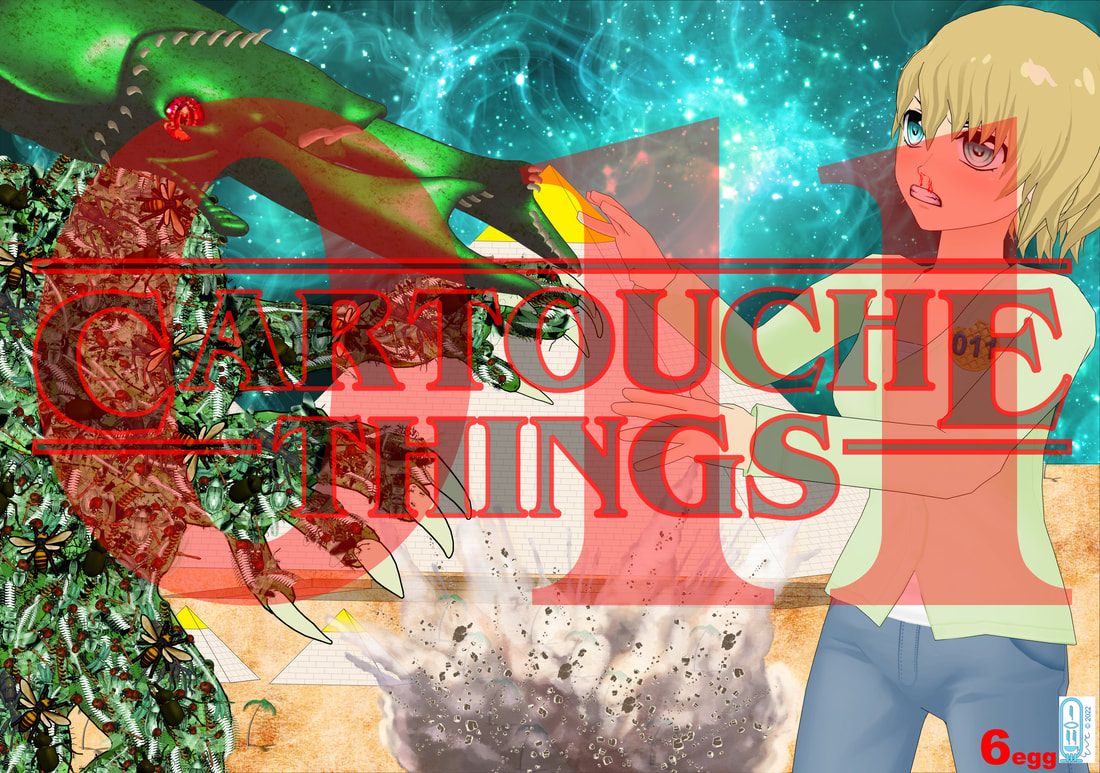 Chapter 7: Seabase
This is my first released chapter illustration for CC3, and is based on the real-life Scouts BSA Troop 1028/9 Seabase adventure in July 2021 to St. Thomas, US Virgin Islands.  I really had a blast drawing all my favorite USVI sea creatures (plus a few crazy Easter eggs) for this one, but it was a little bittersweet to draw as Marc and I were set to go a few weeks earlier but our trip was cancelled by nasty old Hurricane Elsa.  But I'm happy to report that we both had a wonderful time on our rescheduled Seabase adventure in August 2022 with an amazing crew of Scouts (several of whom, like Marc, have characters in my book series based on them) and naturally there was some new Scout craziness on the trip that made great material for this chapter!
​
Still have a few final tweaks to make!
​Characters clockwise from left: Akiiki, Marc, Sophia, Asim, Alec, Emily, adults on boat: Miss Jenifer (Alec’s mom), Captain Charlie, Mr. Eric, and then Sydney and Tyler on the far right 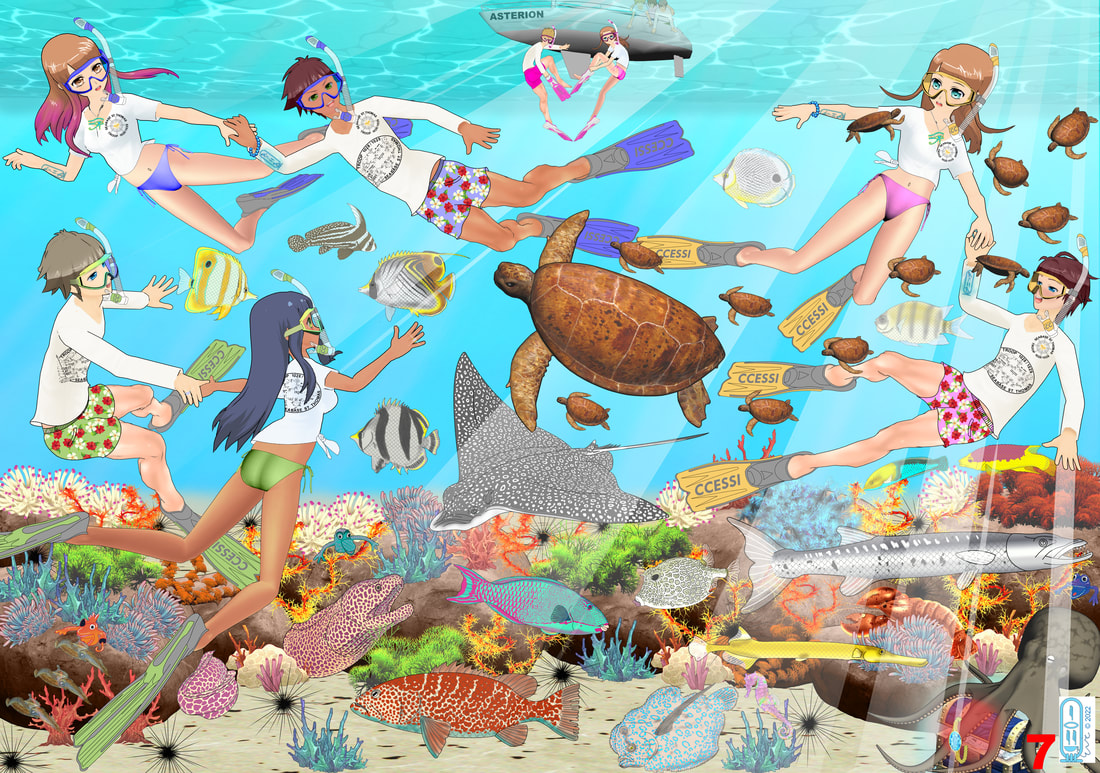 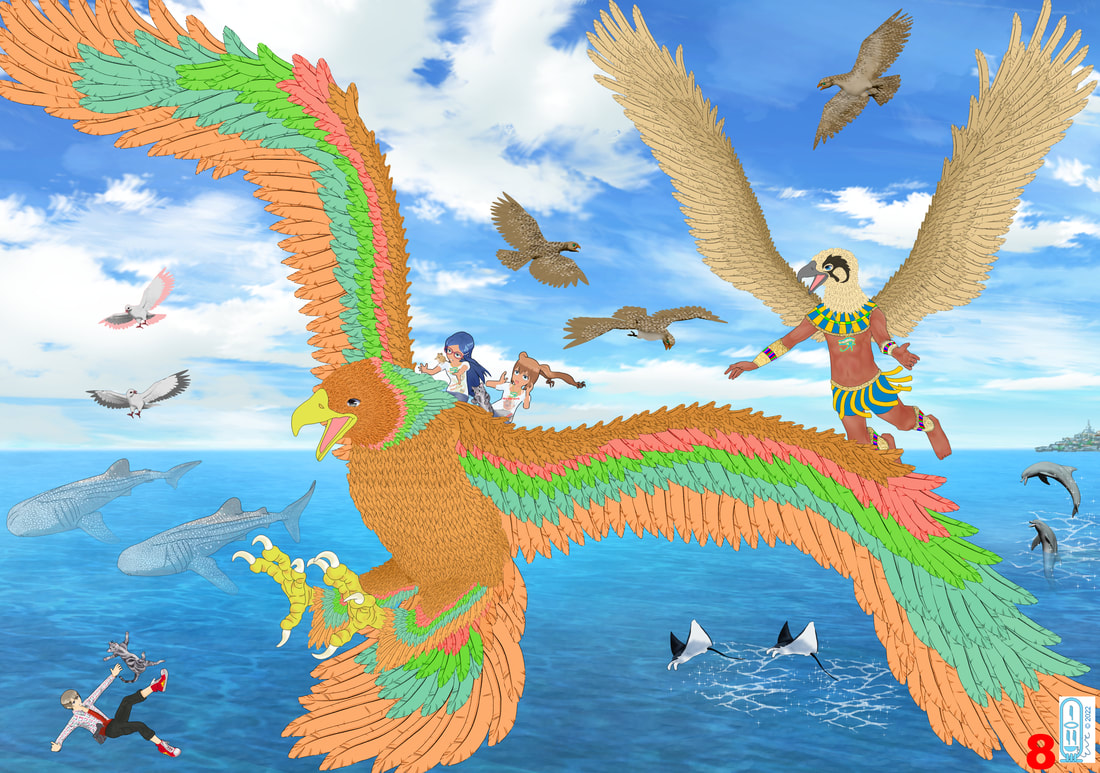 Chapter 9: Lowkey
Finally, a relaxing day of lowkey fun (plus a Seabase reunion) for most of our heroes! 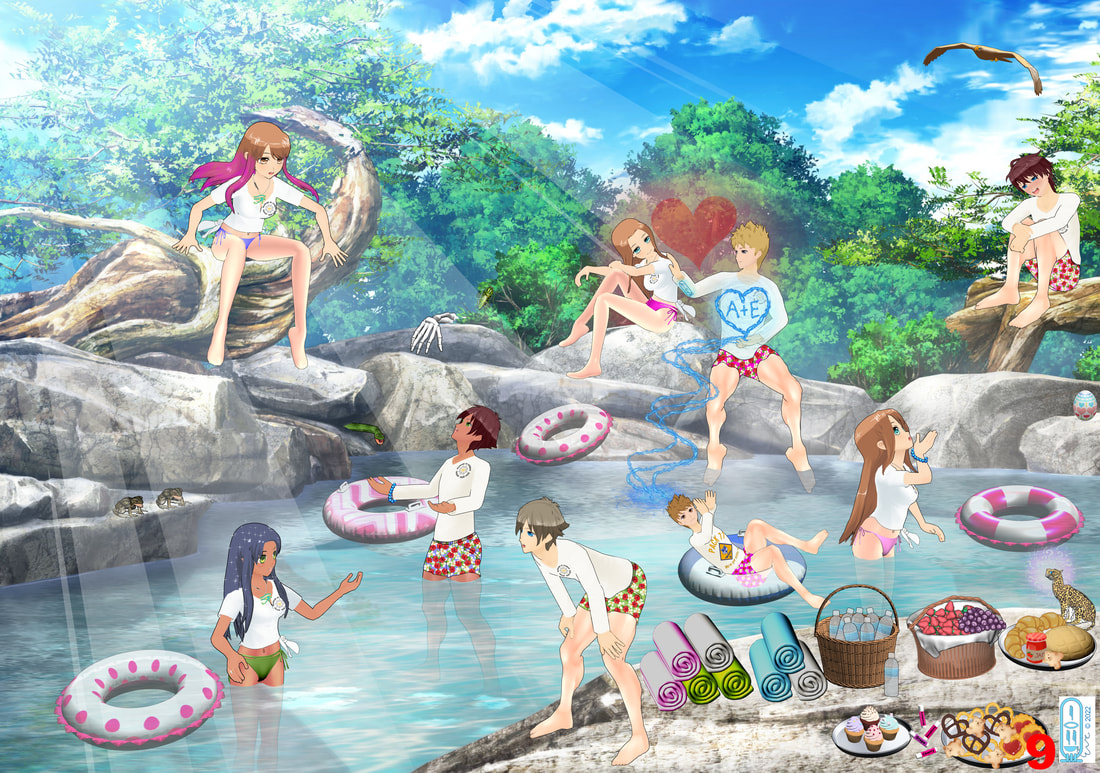 Chapter 10: Knossos
First rough draft!  I felt obligated to really try to do this wonderful site justice, so it took me forever to do the linework (over 13,400 lines) for this 3D birds-eye overview of the whole palace of Knossos (back in its hey-day).  It was a huge challenge but I love the way it is turning out!  I still have lots to do including a little more coloring (see my Chapter 12 artwork for the authentic color scheme), adding trees and landscaping throughout and a lush garden on the right, maybe a bull or two, and of course adding a bunch of ancient Minoans moving around the palace and grounds going about their normal routine (while Lucas is spying on them via his time window).  I took a few artistic liberties like adding a Pompeii-style oval theater in the top center instead of the more rectangular (and a bit boring) one from antiquity, and obviously I went a little crazy with the roof-top bull horn decorations and Minoan light-wells (basically open skylights to let sunlight in which are cool, but must have been a bit annoying when it rained). 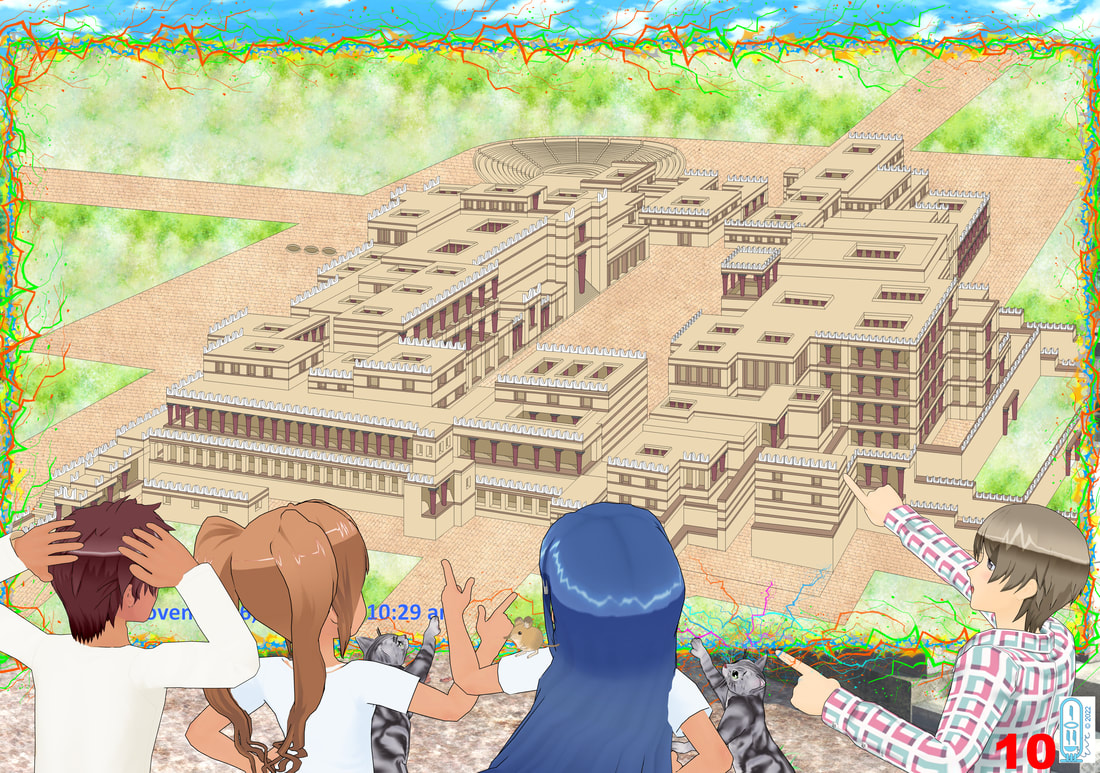 Chapter 11: Minos
First super rough draft - just my linework and base colors for the awesome throne room in the Palace of Knossos (back in its hey-day).  Characters King Minos, Theseus, Ariadne, and palace guards coming soon!  Still lots to do!

Cool fact: The solid stone (and vividly painted) throne here is the oldest throne ever uncovered in Europe! 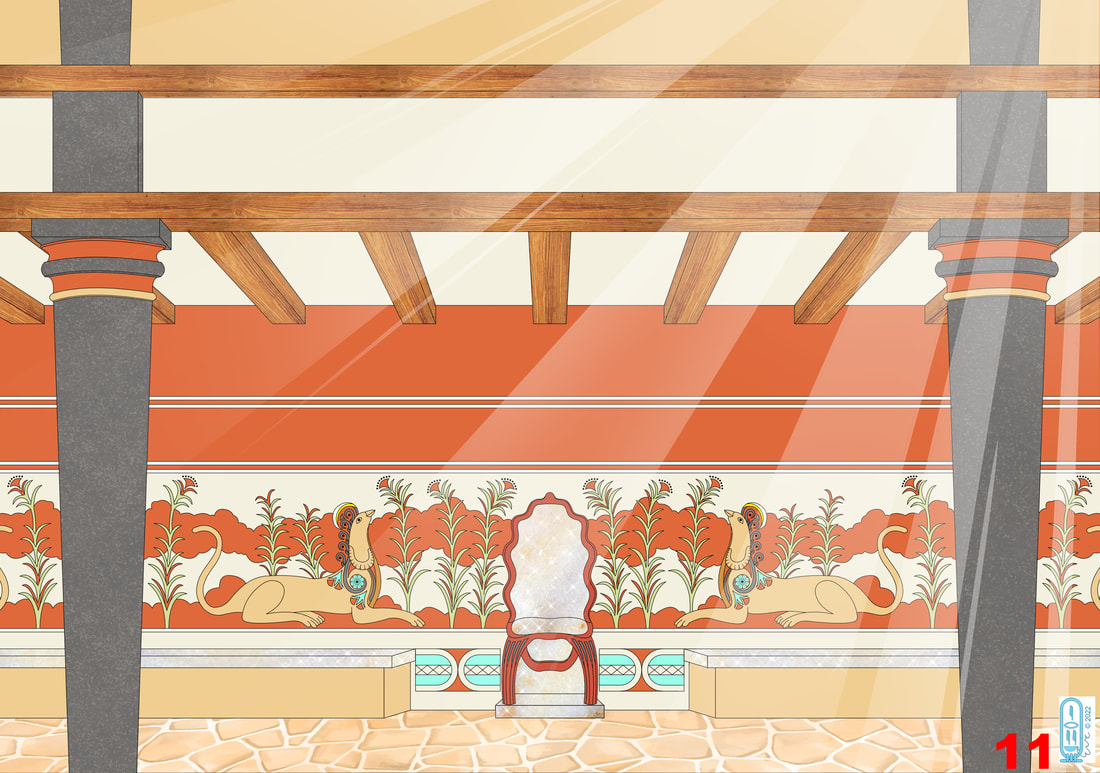 Chapter 12: Bull-leaping
Almost done with this one - so far my background of the central courtyard of the mighty Palace of Knossos (back in its hey-day) and crazy bull-leapers, but lots of spectators, Easter eggs, and more details coming soon!  The bull-leaping scene is based on the famous fresco from Knossos, and I tried to get the bull and the leaper poses as close as possible to the ancient original! 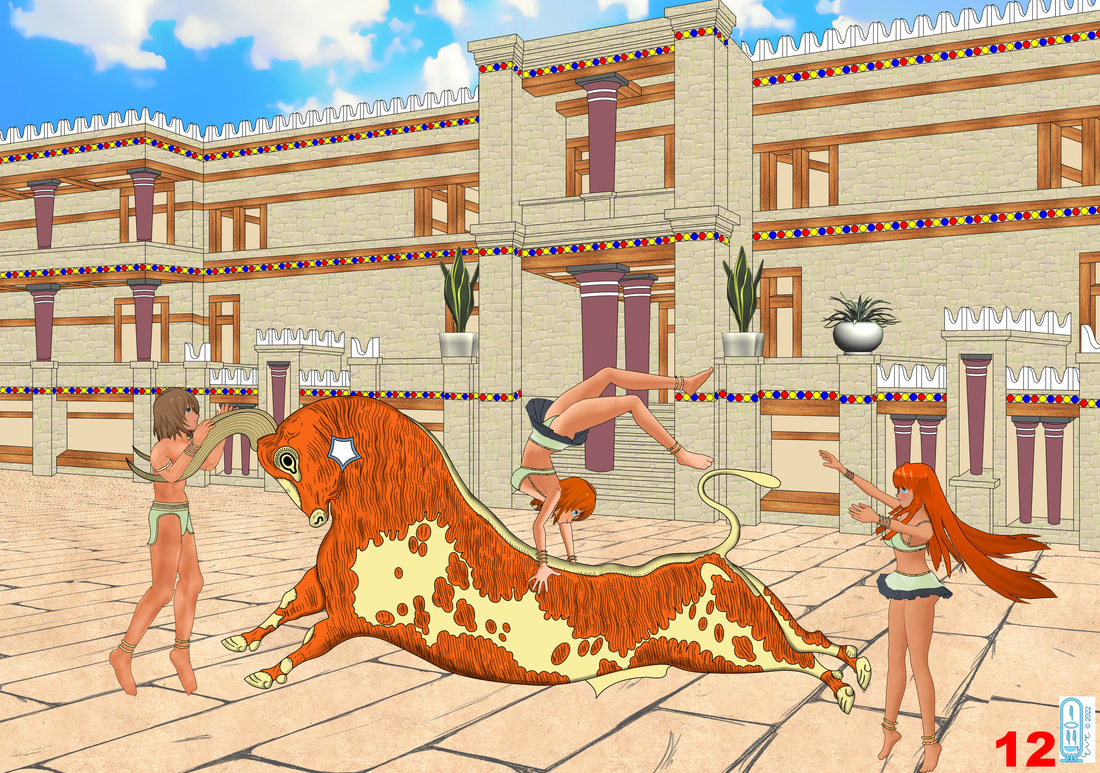 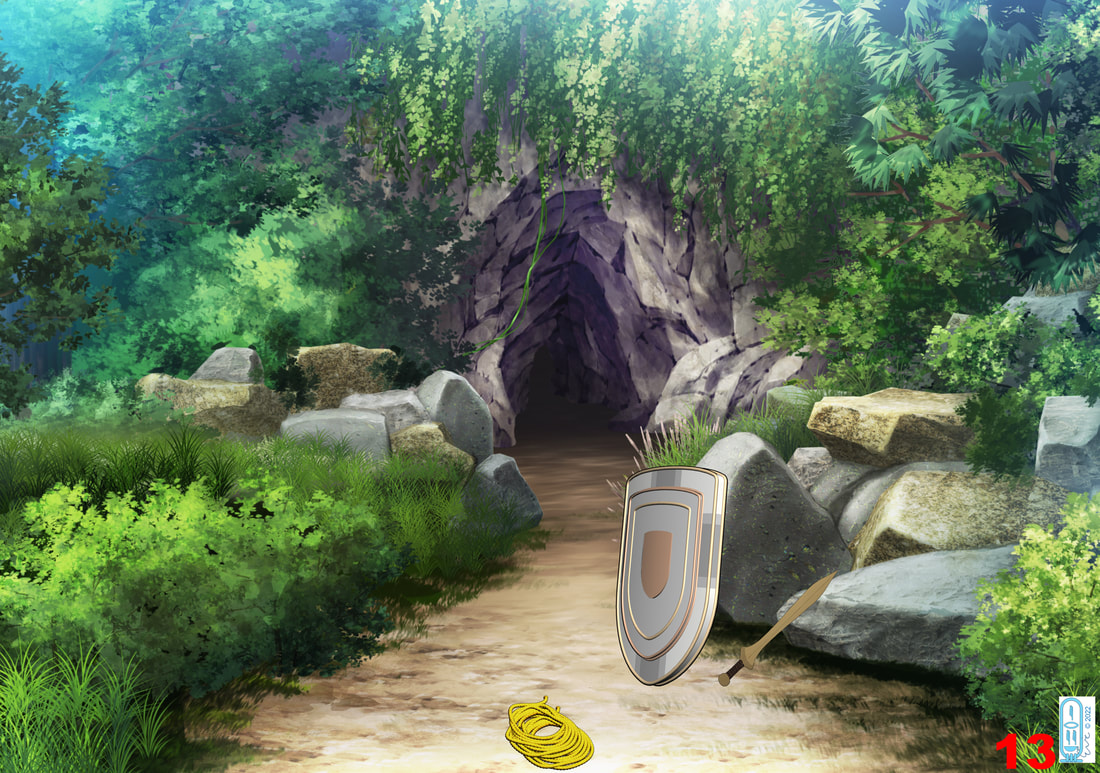 ​Hint: Anubis is up to no good, as usual.  He's building a jackal warrior army (see CC1 Dreams) from a grotesque combination of jackals and tortured human souls from his underworld.  It's going to be yucky, so consider yourself warned!
Chapter 15: Schemes
First rough draft of the Queen's Hall in the mighty palace of Knossos (back in its hey-day), still lots to do.  I'm almost done with the famous Dolphin Fresco on the left (still need to add the little fish in between), and I haven't started on the trim and the famous Dancing Girl Fresco for the white walls in the center. 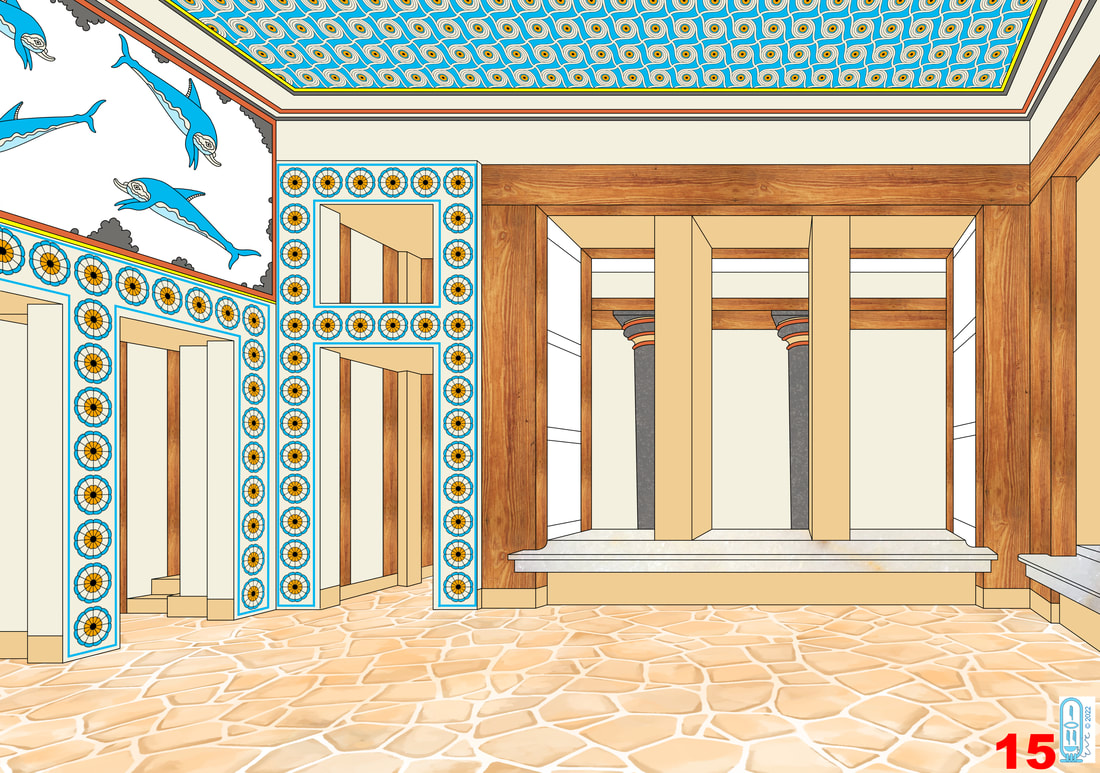 Chapter 16: Storm
Working draft, still a bit to do!

​Sneak peek dialog from CC3 (blatantly working in one of my favorite power quotes):
A few seconds before this scene - "Trust me, youngling, you cannot withstand this storm," Anubis growled menacingly to Sydney.
This scene after Sydney's surprise teleport - "Trust ME, dog, I AM the storm," Sydney whispered fiercely, neatly slicing off his ear with her lightsaber while breaking his necklace to retrieve the three precious cartouche bracelets.
​
Characters, left to right: Anubis, Sydney (post-teleport), Lucas, Ava, Sydney (pre-teleport), Asim 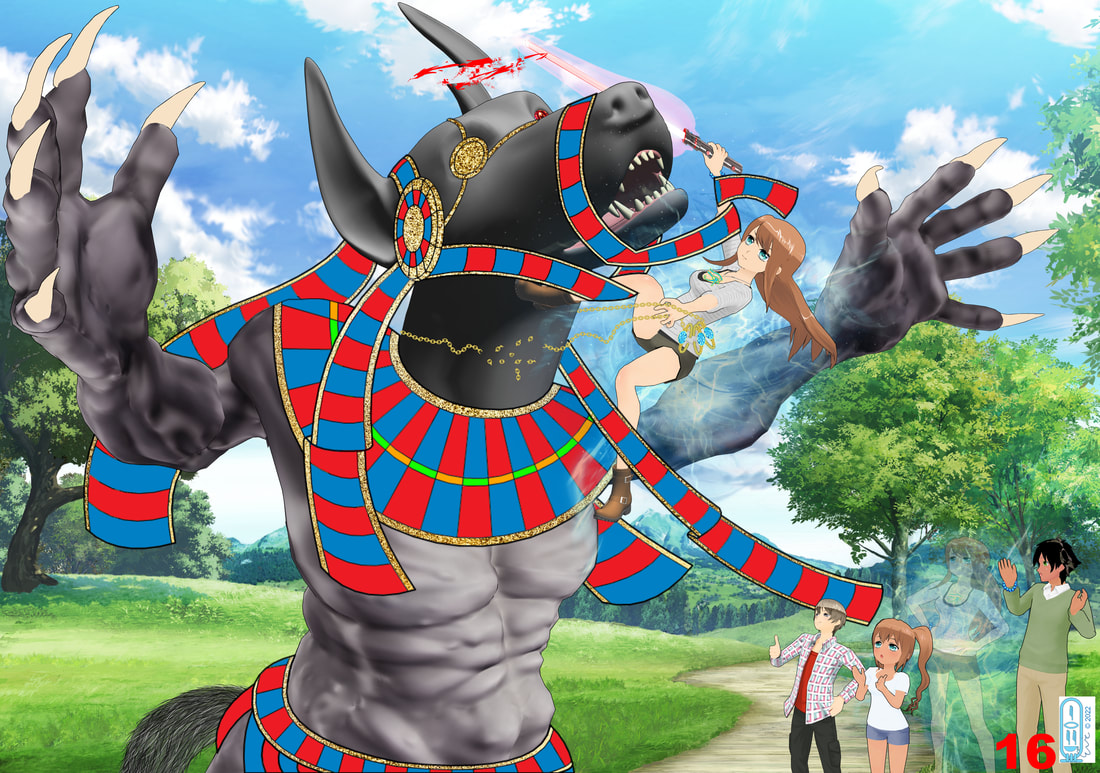 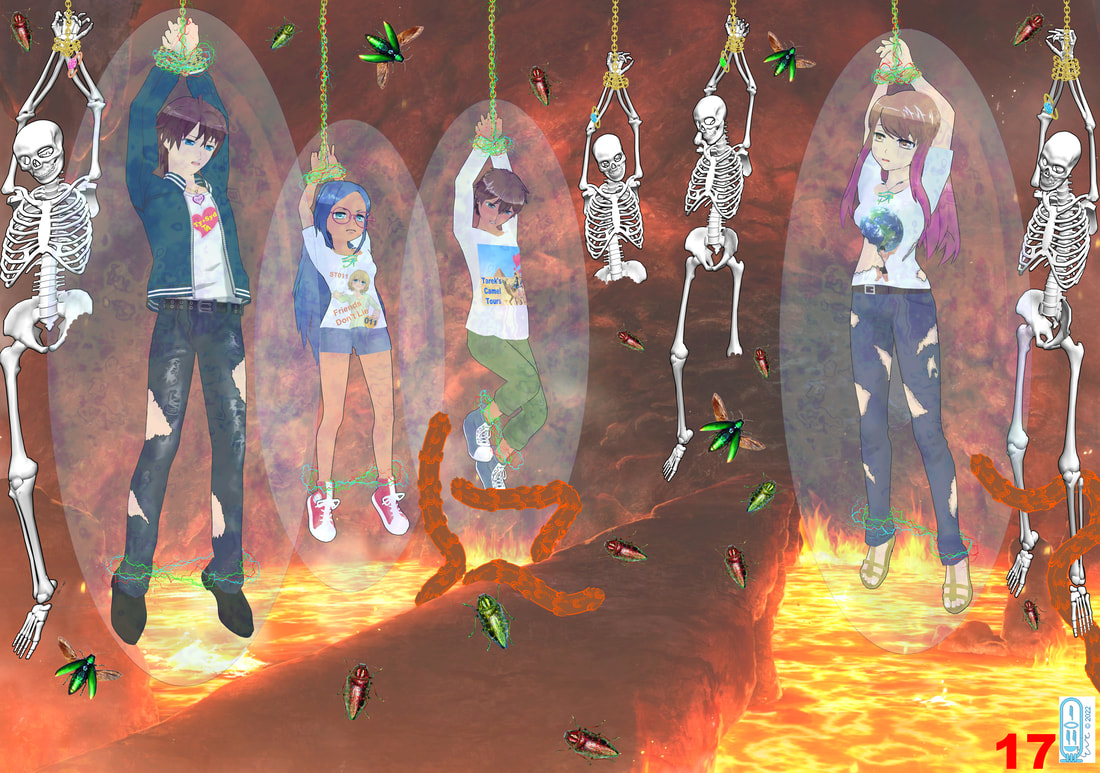 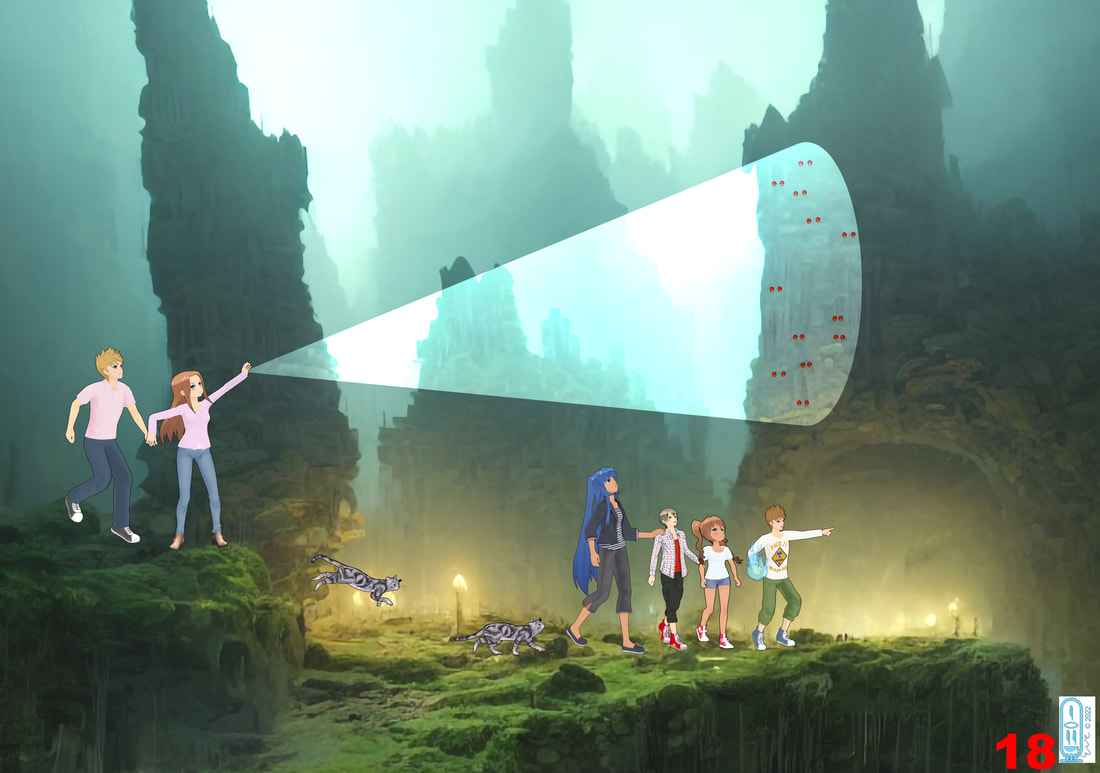 Chapter 19: Search
Second rough draft, still lots to do!  So far, so good! 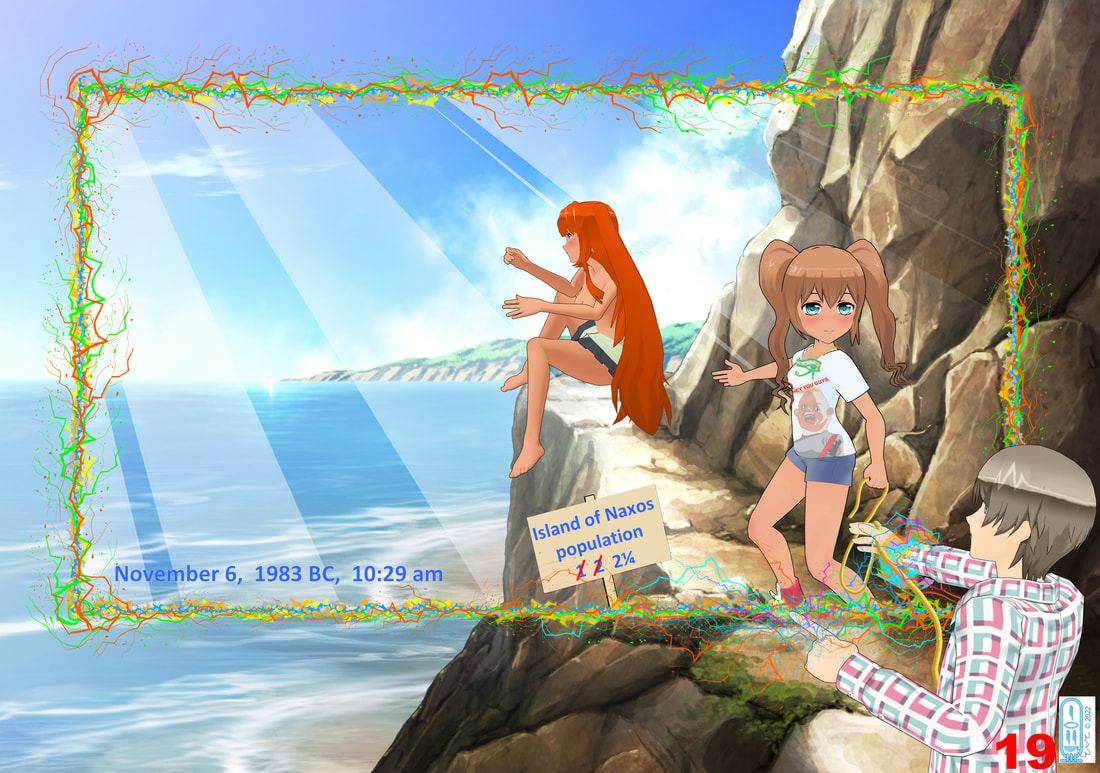 Chapter 20: Maze
First super rough draft - will be an extract from the final CC3 cover art. 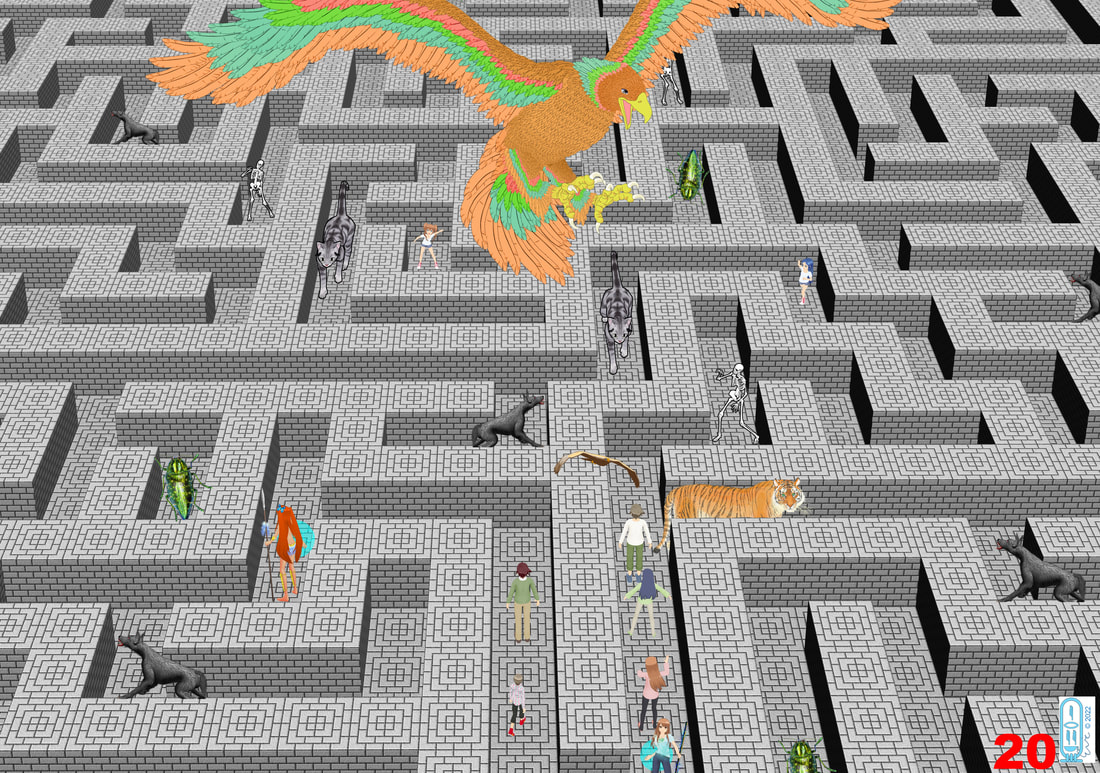 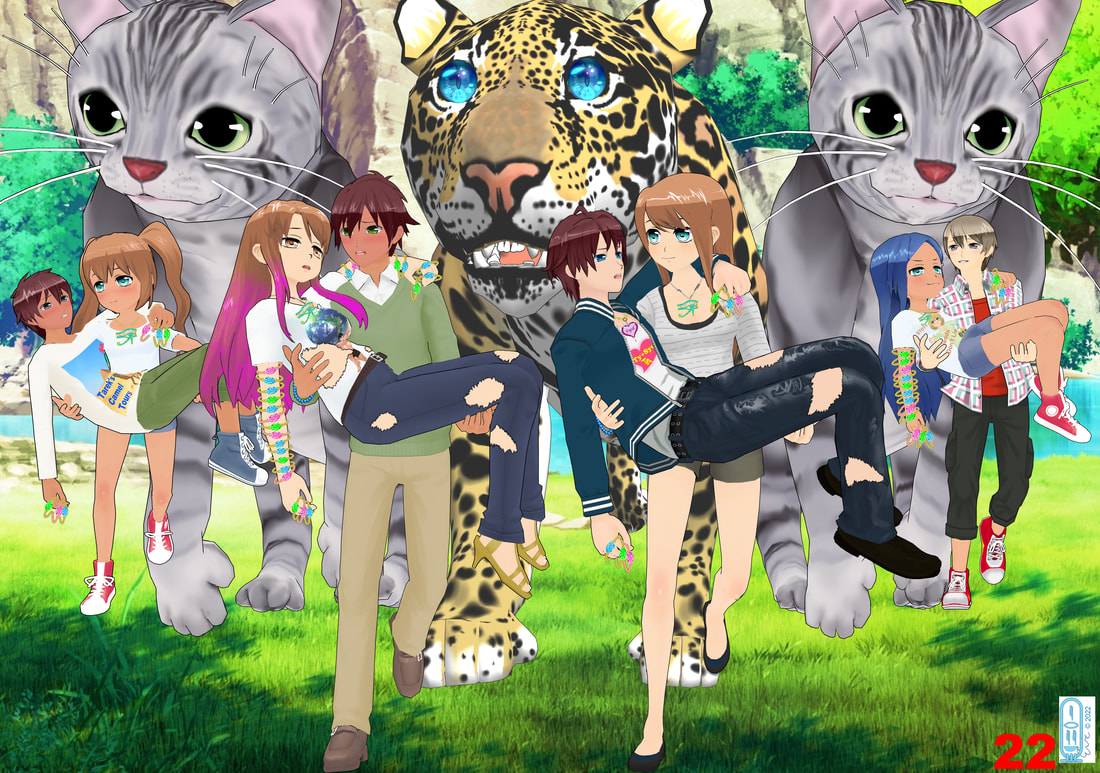